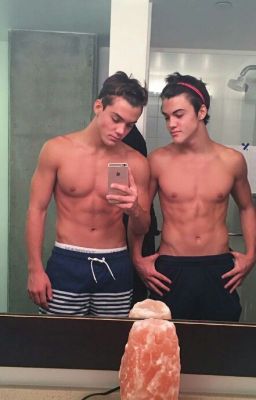 Un nuevo libro por leer. All chapters have sexual content. The plot exists mostly to string together and set up the sexual situations.

This story is about the sexual awakening of Harry Potter during 3rd year and encounters with several of his classmates, mostly older ones like his fellow Quidditch players, but with Colin too, and at least one OC.

All sexual situations will be gay. I welcome any constructive feedback, suggestions for the plot, and illustrations of the story.

I've had one such illustration already, posted here. Also, I strive for zero typos, so please point them out to me via email if you find them: caladan10 at tutanota.

Let me know what you think Just link over to here. Bill and Charlie have always been close. The fact that both are dragon animagi means their bond goes much deeper than that of typical brothers, in fact they have become mates and now share a telepathic mate bond as well; so when Bill goes back to their parents home for a visit, Charlie must communicate to him the moment he goes into labor, the question is, can Bill get to him before he delivers their eggs?

Things in the future got so fucked up. After the mess with Ginny Weasley and the diary, the girl housed a shade of Voldemort's soul.

And thus, ended up helping bring him back, start another war, and a bunch of other shit. This is the story of what happened to the good guys and heroes after the villains executed them by throwing them into the veil.

Bill and Ginny are alone at the Burrow, and Ginny's being too irresistible for Bill. Surprise arrival of Charlie gets him thrown into the mix as well.

What happens when Hermione arrives at the twins' flat to find them being more than brotherly with each other. I wished I could tell them that what he did to me deserved much more than just a beating.

Dad never spoke to me about it neither did Mum, and I never really understood. After Dad beat him up, he stopped for four months, and then started doing it again, gradually.

When he finally stopped I felt relieved, but at the same time I felt very depressed because no one had stood up for me.

For the first couple of years after he stopped, we would be around each other without talking or dealing with each other, and even now our relationship is very formal.

This is what bothers me. How can I hurt you so badly, and then afterwards see you and go out with you? Plus with the way I grew up, I would have never understood what was happening.

Now, however, in the streets I am never silent! And if anyone tries to do anything I turn it into a scandal!

In the beginning I used to be silent, but now no!